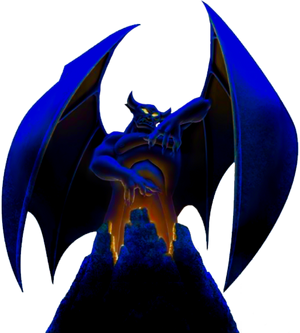 Chernabog is a massive demon who appears as the villainous main antagonist of the film's final segment "A Night on Bald Mountain" in the 1940 Disney film Fantasia.

An embodiment of darkness based on popular imagery of the Devil, Chernabog is a humongos demon with black skin, horns, pointed teeth, clawed hands, a muscular torso and large batlike wings under which he can conceal himself. He is said to awake on Walpurgis Night, where he parties on top of Bald Mountain, calling damned souls to him only to torture them for his own sadistic enjoyment. Due to his devilish nature, Chernabog is easily repelled by the bells of a church when comes dawn. In spin-off material, Chernabog has demonstrated the ability to change size (so as to fit inside a building), though he always remains at least twice as tall as a normal human being, and also the capacity of speech.

Once Upon a TimeEdit 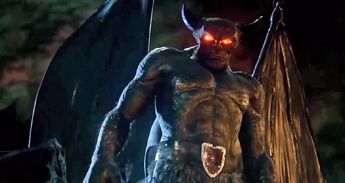 The Chernabog is a creature also featured in the live-action TV series Once Upon A Time. Although based on the 1940 version, this monster is quite different. For a start, it is rather mindless and more beastly than its animated counterpart. The Chernabog is a dark creature, about 7 foot tall, which has been tasked by the Dark One eons ago to capture and bring him the person with the greatest capacity for evil that it can find. It was temporarily sealed by Merlin inside the Sorcerer's Hat, but is accidentally freed, although it is eventually destroyed.
Retrieved from "https://all-movie-monsters.fandom.com/wiki/Chernabog?oldid=4918"
Community content is available under CC-BY-SA unless otherwise noted.