Start a Wiki
Constantine, the world's most dangerous frog (and #1 criminal), is the main antagonist of Muppets Most Wanted. He was in a Russian Prison called a Gülag, he manages to escape in various ways. He likes blowing thing up, always walking away, then blows whatever he choose by hitting a Red button that activates a bomb. He escaped in the movie, with the help of his assistant, The Lemur, He plays the fake Kermit the frog, since he glued a fake one on Kermit's lip. 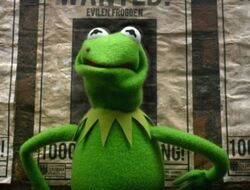 Add a photo to this gallery
Retrieved from "https://all-movie-monsters.fandom.com/wiki/Constantine?oldid=4354"
Community content is available under CC-BY-SA unless otherwise noted.