Start a Wiki
Dr. Wraith was a villain in Disney XD's Mighty Med. 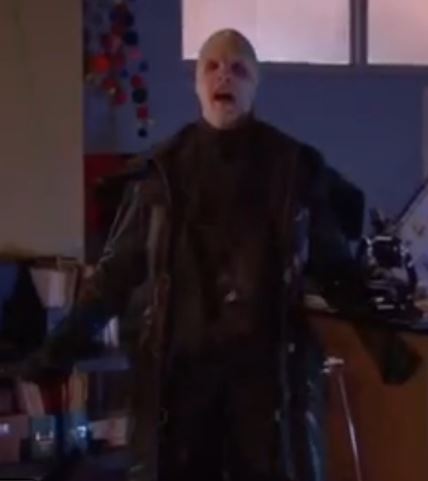 Before no one knew what Dr. Wrath really looked like due to them always wearing a cloak, and being a shapeshifter (as well as skipping ever picture day) the arrived at Kaz and Oliver's school, where he shapeshifted into Stefanie and impersonated her, spreading negative energy to strengthen them. While building a machine that would make the whole world negative. Knowing they were being followed by Agent Baylock, they waited to Kaz imprisoned him think he was Doctor Wrath, before revealing themselves and then imprisoned him and Skylar. Then after telling them there plan, returned to the science lab. Kaz and Skylar managed to break free and Skylar confronted and fought her, while Kaz altered the machine. However Dr. Wrath prooved too powerful for Skylar and the Machine activated. However due to Kaz's alterations instead of creating negativity, it created possitivity, meaning Doctor Wrath was left with no power. Thus he returned to his true form, before exploding being reduced to a pile of ashes.

Retrieved from "https://all-movie-monsters.fandom.com/wiki/Dr._Wrath?oldid=4468"
Community content is available under CC-BY-SA unless otherwise noted.