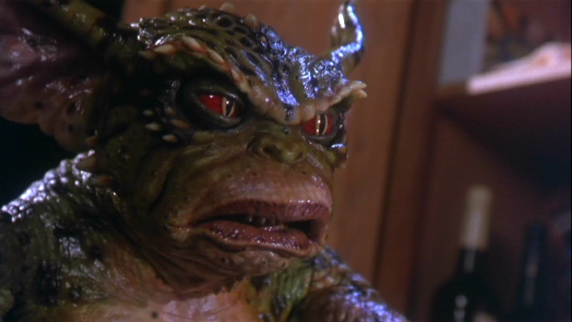 George was born together with fellow mogwai Mohawk, Lenny and Daffy when Gizmo got water on himself from a leaky faucet. His body unfolded in a drawer with Lenny, whom was unfolded about two seconds after George. He was the eldest of the new mogwais. He ordered Lenny to tear a vent open, accidentally getting hit by the vent covering. Then he, Lenny and Mohawk stuffed Gizmo inside the ventilation shaft and shut him in before leaving. They ended up at a restaurant on the lower floor of Clamp Center and ate after midnight, then they formed cocoons together with Daffy who joined them.

George, Lenny and Daffy, now as gremlins, then appeared during the Microwave With Marge cooking show that was being filmed. As the humans inside the room started fleeing as the gremlin trio was attacking, George angrily noticed the microwave and let Lenny throw some pots inside of it before he shut it and started it up (this was a reference to the first film where a gremlin was killed in a microwave). The microwave then exploded in a ball of fire, setting off the sprinkler system which got George and the other two gremlins wet, spawning a horde of new gremlins. Later sporting a tie and a cigar in his mouth, George and Lenny were seen watching "The Beast From 20,000 Fathoms" on a view screen in the control room and even laughed at it. At the end of the film when the Electric Gremlin was released out over the gremlin crowd in the main lobby, George died together with the rest of the horde; his melting body still had the cigar in the mouth as he died.

Retrieved from "https://all-movie-monsters.fandom.com/wiki/George?oldid=4211"
Community content is available under CC-BY-SA unless otherwise noted.