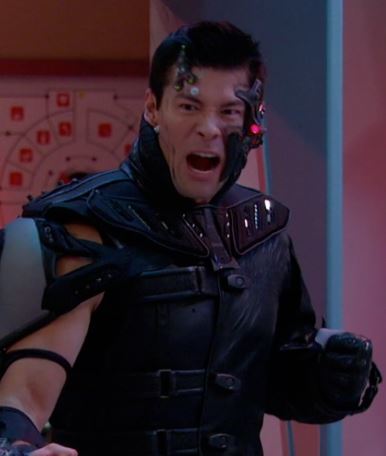 He's said to be Tecton's nemisis according to Kaz and Oliver mentioned in episode 1 of Mighty Med. Kaz also said that his real name is Leslie.

Megahertz is a half-human, half-titanium cyborg because of an accident that happened in an abandoned power station. Now he wreaks terror in cities from Tecton comic books. Alan reveals that Kaz and Oliver performed unauthorized surgery on Tecton. This led Megahertz to find Tecton immediately, believing that he was weak. To his, and all others' surprise, Tecton is perfectly fine after Kaz ripped the gold coin out of his chest. Kaz also helped Tecton to capture Megahertz using a STOP sign. As a souvenir, Kaz received a small chip from Megahertz, enabling the robot that Gus and Jordan built to fly and wow the rest of the class.

He is a hostile grunt who is bent on destroying his nemesis, Tecton.

Retrieved from "https://all-movie-monsters.fandom.com/wiki/Megahertz?oldid=4736"
Community content is available under CC-BY-SA unless otherwise noted.