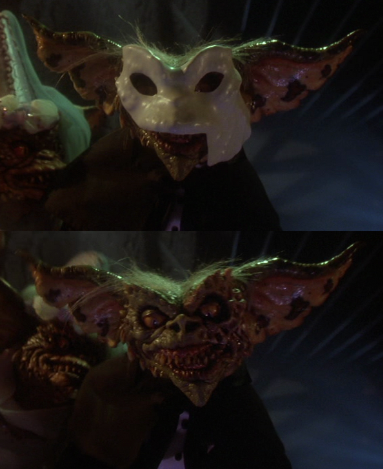 He is first seen in the Clamp Center laboratory where he has acid (saying Acid : warning, do not throw in face) splashed in his face by the Acid-Throwing Gremlin, whereupon then he cackles and dons a white mask. He is later seen briefly during the Brain Gremlin's rendition of the song "New York, New York" and in his last appearance, he is playing an organ and another gremlin who is dressed as a damsel sneaks up behind him and unmasks him. The Phantom Gremlin gets mad about this, so he attacks the gremlin and then snarls and points to the camera as his figure blurs, reminiscent of the famous scene in the 1925 film adaptation starring Lon Chaney, Sr. as the Phantom. He dies along with the other gremlins at the end when they are all electrocuted by the Electric Gremlin.

Retrieved from "https://all-movie-monsters.fandom.com/wiki/Phantom_Gremlin?oldid=4973"
Community content is available under CC-BY-SA unless otherwise noted.