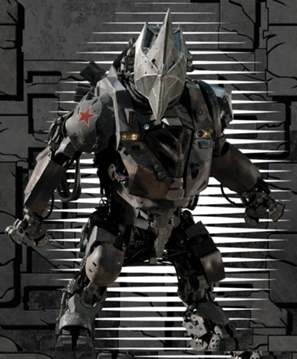 Aleksei Sytsevich (A.K.A. The Rhino) is a russian gangster that utilizes an Oscorp Mech Suit, he is a minor antagonist of the movie, The Amazing Spider-Man 2.

Aleksei Sytsevich and two of his associates hijacked an Oscorp van containing vials of plutonium. Sytsevich was the driver of the truck while his comrades secured the goods. However, Spider-Man intervened and webbed up Sytsevich's allies, handing them over to the police. Determined to not be caught, Sytsevich continued to flee in the truck, causing a great deal of damage to other vehicles on the road and a number of police cars. Spider-Man confronted Sytsevich face-to-face, using his Spidy sense to dodge the rapid fire of Sytsevich's machine gun. Spider-Man disarmed him and then webbed each wrist to the walls opposite so his arms were crossed over his chest. Spider-Man proceeded to pull down Sytsevich's pants to humiliate him further. Sytsevich was incarcerated in the Vault by the NYPD. Later, after Harry Osborn's incarceration, The Gentleman visited Harry, speaking to him Harry about their plans for revenge against Spider-Man by forming a team of villains. He also informed Harry that Sytsevich was a prime candidate to pilot a large metal exo-suit created by Oscorp. Sytsevich was broken out of the Vault and donned the exo-suit. He took to the streets of New York, which hadn't seen Spider-Man since his confrontation with the Green Goblin and Gwen's death, and began shooting at the police, calling himself "The Rhino". A boy dressed as Spider-Man, who Spider-Man had helped out earlier, stepped out in front of Rhino, trying to make a stand. Rhino mocked the child when the real Spider-Man arrived on the scene. Rhino began to charge at Spider-Man who leapt in the air using a manhole cover as a weapon.

Retrieved from "https://all-movie-monsters.fandom.com/wiki/The_Rhino_(The_Amazing_Spiderman_2)?oldid=4533"
Community content is available under CC-BY-SA unless otherwise noted.